Raphael was born on March 28, 1483 and is considered to be one of the best artists of the High Renaissance period where he with Michelangelo and Leonardo da Vinci formed the trinity of great artists of that period (Wölfflin, 87). Raphael was born in Urbino, Italy to Giovanni Santi who was both a poet and a court painter to Duke. The court was established by Federico who emphasized more on the literacy. After the death of Federico, his son Guidobaldo took over ran the court. Raphael was extremely lucky to learn social manners and skills from Vasari in this court. Raphael never had the conventional education but he still had very able personality and easily made his way to the highest social levels. Raphael showed talent at an early age of around 10 when Vasari described him as very helpful to his father. Raphael also self portrayed when he was in teens. 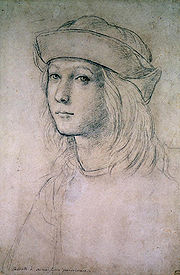 Self-Portrayed Raphael in his teens

Various historians state that the talent of Raphael prevailed during his apprenticeship in a workshop where his father left him when he was eight. Other sources also show that he learnt some of his skills from the court of Urbino apart from his father.

Modern historians believe that Raphael also worked under the mentorship of Perugino after 1500 in Umbria. This claim is made by founding similarities in the way they both painted by thickly shadows and darker areas with oil varnishes. The work of both showed that Raphael was the only one who absorbed most of the skills from Perugino. Perugino also agreed to this fact. Perugino later prescribed Raphael as a master in 1501. Baronci altarpiece was the first officially documented work of Raphael for the church of St. Nicolas of Tolentino. The group of artists who were assigned this task included some of the pupils of his father as well including Evangelista (Gould, 77). The work on this painting had started in 1500 and though Raphael gained the master title in 1501, he visited the place and played his role previously as well. After this Raphael worked for many other churches as well. He also got invitation from one of his colleagues from the Perugino’s classes who wanted him to work on cartoons and give him ideas on what to design (Vasari, 88). This invitation determined that he was readily moving forward towards success and at this early age his demand was increasing. Life of Umbria was very successful for Raphael as he was now becoming popular all around Florence and Umbria. His stay in Umbria ended in 1504.

Florence was considered as the center of art in High Renaissance before it’s shifting to Rome. Historians believe that Raphael was never a permanent in Florence and led a nomadic life. As he came to Florence, he also brought a letter of recommendation from the mother of next Duke of Urbino to Gonfaloniere of Florence describing the level of skill Raphael had (Jones, 126). Raphael had been able to gain an insight upon the Florence art when he was in Umbria as one of his friends visited Florence regularly and Perugia also had information about this art. Therefore when he came to Florence, he knew what was in demand and how he has to cope with it. Leonardo da Vinci also returned to Florence in 1500 and lived there until 1506. Raphael emphasized mainly on complex and dynamic positions. In Florence he studied the art of nude men who were fighting as this was the current trend in Florence. Raphael also portrayed a painting of a woman, much like Mona Lisa, though different in every other aspect. Raphael also tried to emphasize the art of Leonardo in his work in paintings such as Leonardo's lost Leda and the Swan, but Raphael made sure that the artistic touch of Perugia is present to a greater extent. Raphael provided a great mixture of art in Deposition of Christ drawing where he spread the figures in front of picture. After getting new artistic skills from Leonardo’s art, he moved to Vatican in 1508.

Raphael lived remaining of his life in Rome when he came here in 1508. He was soon invited by Pope Julius II and later on worked for St. Peters. His popularity had grown at greater length until now. He was commissioned into the Vatican Palace at Pope’s personal library where already many other artists were working. Raphael until now had only commissioned one altarpiece in Florence and this project was much important than his whole previous ones (Wölfflin, 81). His first work was the painting of Stanze or more popularly Raphael Rooms where he impacted Roman art with great influence. With his success with first of the Raphael Rooms, he was given further rooms so that he could innovate something. In getting further rooms he even replaced his mentor Perugia. During his time in the Vatican Palace, he designed School of Athens, The Parnassus and the famous Disputa (Vasari, 152). His three rooms had paintings on each of the wall and sometimes on ceilings too. He was working with his workshop team which he had hired according to his requirement. After the death of Raphael in 1520, fourth room was designed by his workshop team to give him tribute of being one of the greatest artists ever to originate in Italy.

Michelangelo in the meantime found himself standing against Leonardo and Raphael. As he got a sneak into the Raphael Rooms, he quickly identified that his artistic touch has been employed in the paintings. One of the main reasons for the success of Raphael was his ability to absorb the artistic touches of other artists and then showcasing these touches in a very new amusing manner. This was how he became best pupil of Perugia in Urbino, in Florence got to know how Leonardo worked and in Rome he used what he had learnt from the paintings of Michelangelo when they were displayed in Florence (Gould, 33). Michelangelo, however, accused Raphael of plagiarism and displaying artistic touches which belong to him. He also later on accused him of learning all the skills from him. Nevertheless historians have agreed upon that Raphael had the best ability to interpret and absorb art. No matter how difficult it may have been he easily composited new artistic touches from those of Leonardo and Michelangelo.

Two of the greatest works of Raphael are considered as The School of Athens and The Sistine Madonna. The School of Athens was painted by Raphael between 1510 and 1511 and is hung on one of the walls of the Raphael Rooms in the Vatican Palace. The painting describes the different schools of thoughts of the Greek Empire where historians believe that every great Greek philosopher is present in the painting, however, only Aristotle is clearly distinguished (Jones, 99). 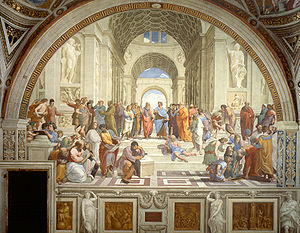 The School of Athens

The purpose of the designing of this painting was to shed light on the school of philosophy. Different themes are originated in the painting which includes Seek Knowledge of Causes; To Each What is Due, Knowledge of Things Divine and Divine Inspiration. These are the basic schools of philosophies in the Greek Empire.

The next painting is known as The Sistine Madonna and was painted by Raphael between 1512 to1514. The painting was supposed to be decorated at the tomb of Pope Julius II, but was later on donated to Augustus III (Pon, 110). The painting showcases the bed of clouds where a virgin comes from the imaginary world to the real world. St. Sixtus’ gesture and St. Barbers glance towards the children at the bottom of the painting is directed towards the faithful. The painting had a very amusing history afterwards in the contemporary ages where during WWII it became a source of success for the Soviet forces. 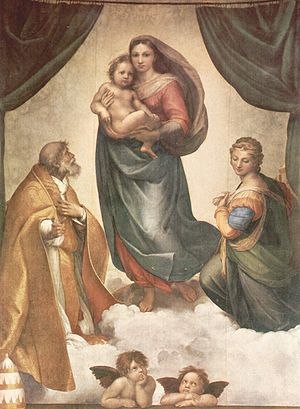 Raphael lived a grand life in Rome where he stayed in a palace specially designed for him. He died on April 6th, 1520 at an age of 37, the reason of death is still unknown as many believe that he got fever due to excessive sex, but it is disputed. After his death, he was approached by a grand funeral which was attended by thousands of people and was buried in Pentheon (Pon, 210). The inscription on his grave read, “Here lies that famous Raphael by whom Nature feared to be conquered while he lived, and when he was dying, feared herself to die”. Without a doubt Raphael was a great artist. His contemporaries regarded him one of the best. However, he was not popular than Michelangelo at the time he was alive, but soon after his art was recognized by many artists to be filled with innovative compositions of all this mentors in a touch which is unique and was never seen before. He was believed to have countered the excess of Mannersim in his paintings which definitely makes him unique among the other renowned artists like Leonardo and Michelangelo.

Today Raphael compositions are considered an integral part of the trainings that are being conducted by the Academies of Art. His composition techniques and his interpretation skills are taught in order to train new artists around the world.

Virtue and Love vs. Sin and Decay
Manager Interview